Still a High Threat of Stinging Insects During the Fall Season

As summer slowly begins to come to an end, stinging insects, including wasps, hornets and yellowjackets, are entering their most active season. NW Pest Control wants to remind homeowners to be cautious. As the summer winds down, stinging insect activity perks up.  Especially for those who are determined to get as much time outdoors and soak up the last few weeks of warm weather. These pests remain a threat even as the days get shorter. 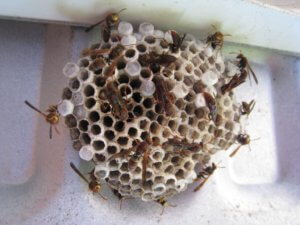 Many people think that stinging insects are most active in June and July, but stinging insects are most aggressive in the early fall as they forage for food that will sustain them during the winter. Come September, stinging insect colonies in our area can contain upwards of 4,000 members, leading to an increased number of stings. The National Pest Management Association (NPMA), a non-profit organization, reports that more than 500,000 people are sent to the emergency room every year due to insect stings. Most people experience localized swelling and pain from an insect sting, but about 3 percent of the population also develops a severe allergic reaction.

People should be aware and continue to be on the lookout for stinging insects when attending end-of-summer picnics or completing home maintenance projects around the yard this season. Anyone who encounters a stinging insect flying nearby should remain calm, cool and collected. Swatting at a yellowjacket or wasp can actually provoke an attack.

This may seem odd, but the best thing to do if a stinging insect is flying in close proximity is to blow on it, so it does not feel threatened.  However, if a nest is found on the property, make sure to contact our office for a licensed and pest professional for assistance in removing it.